Migrant Death at the U.S.-Mexico Border

Migrants are crossing the border for a better quality of life and future for themselves and their families. “People migrate to where there are resources, where their family members are, different opportunities, or migrate away from violence and crushing poverty,” said Abel Rodriguez, J.D., Director of the Center on Immigration at Cabrini University. According to the Congressional Research Service, “Mexico’s brutal drug trafficking-related violence has been dramatically punctuated by beheadings, public hanging of corpses, car bombs, and murders of dozens of journalists and government officials.”

Students in Mexico are not guaranteed a meal at school and a fulfilling one at that. The new President of Mexico, Enrique Peña Nieto, had promised better lunches and salaries to teachers but has yet to do so. Jobs and obtaining an education in Mexico are very difficult to achieve making the process of coming to America one worth dying for.

Rocio Gonzalez, a student at Cabrini University and a daughter of migrant, loved living in her hometown Toluca, Estado de Mexico. She enjoyed the authentic food, the culture, and the language. Due to her family wanting a better education for her and her sisters, plus a decent job for her parents, moving to the United States was an obvious decision. “We don’t take anything for granted, everything that we get we work for it,” said Gonzalez.

Gonzalez’s parents came here legally and obtained their citizenship through a work visa. She said that by sending money back home it could be dangerous and can ultimately make your family a target. If family members can send money back home, then people notice. These people can threaten you and your family members asking for a portion of that money and making life very uncomfortable. Many times, the threats get so bad that these people have no other choice but to leave and travel to the border. 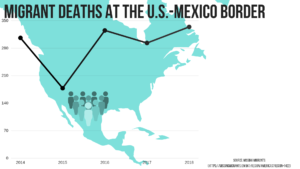 Missing Migrants is an international organization that tracks the deaths of migrants, asylum seekers, and refugees. According to Missing Migrants, there were 368 deaths at the U.S. border with Mexico in 2016, and that number rose in 2017 to 412 deaths. The death of migrants is on the rise every year and most recently on the rise due to extreme weather conditions and different paths that migrants are taking. International Organization for Migration (IOM) stated, “As the likelihood of arrest grows, migrants tend to seek out more remote routes to avoid apprehension. The prolonged exposure to the extreme environments at the border, where temperatures often top 40°C (104°F), combined with the difficulty of bringing assistance those in need in remote areas have repeatedly been cited as leading causes of death.”

Dehydration is the leading cause of death at the U.S.-Mexico border, according to Border Angels. This non-profit agency helps those crossing the border by conducting such activities as water drops. During these water drops ‘angels’ drop off jugs of water along the path that migrants would take in the California desert.

"There are about five different paths that migrants take," according to Babette Pages, Border Angels Donations Coordinator. Water is essential in helping migrants cross the border because many are dying from hyperthermia. Hyperthermia is when a person is experiencing heat exhaustion. One way to help avoid hyperthermia is to take breaks in a cool area and drink water every 15-20 minutes. Border Angels is trying to combat this issue. Through getting donations for the water drops, volunteers dropping water off in Arizona desert, are possible. These donations count toward the costs of transportation, water, and administrative oversight. Border Angels has a donation tab on their website where PayPal is accepted, and to volunteer, visit BorderAngels.org and fill out the form under the ‘Our Services-Water Drops’ tab. “We assist immigrants on the road to citizenship by providing free and low-cost legal assistance, as well as encouraging English language education and a comprehensive understanding of American culture, society, and legal system,” according to Border Angels.