The Effects of Deportation Fears on K-12 Students

Undocumented children have lower rates of attendance than their peers, which can affect their test scores and their potential to attain higher levels of education. Education professionals surveyed by the UCLA Civil Rights Project showed that 70 percent of teachers reported students’ academic decline stemming from their fears of deportation.

These lower attendance rates have no basis in government restrictions since the Supreme Court ruled in the Plyler v. Doe Act in 1982 that all children have the right to attend public schools, regardless of their citizenship status.

“Many students when coming to the U.S., come with a great desire and passion for learning. Because they realize that education is the pathway to success,” said Dr. Bethany Welch, Executive Director of the Aquinas Center in Philadelphia. The Aquinas Center’s mission is to respond to the community’s desire for a welcoming place to offer support and understanding for immigrant communities.

Statistics show children have at least one parent who is undocumented across all states, and in these following six states the rates are the highest. 17.6 percent in Nevada, 13.4 percent in Texas, 12.3 in California, 12.2 in Arizona, 10.1 in Colorado, and 10.1 in New Mexico. 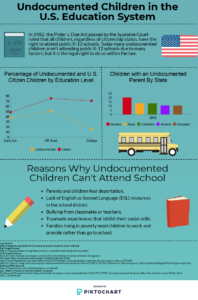 Maria Sotomayor, deputy director of PA Immigrant works to eliminate this threat of deportation from schools with the ICE Out of Schools Program. PA Immigrant is a coalition of several immigration organizations that works to gain and preserve the rights of immigrants, migrants, and refugees. PA Immigrant also works hard to end the deportation of parents and makes school areas a sanctuary where families can aide in the education of their children.

“PA Immigrant just launched the ‘Welcoming Schools’ campaign for undocumented families to address fears they have around the Trump administration’s policies of deportation and helps people understand their rights,” said Sotomayor. This initiative helps families not fear deportation and retain their rights.

When public schools lack funding they could decrease or remove English as a Second Language (ESL) classes that these students often need to succeed. This poses as a major issue to immigrant students, many of whom don’t speak English very well.

Britta Pennypacker, ESL instructor at Norristown High School, is working to make sure that students who may not be proficient in English can learn English and pursue higher education. “Students need the language in order to get the content and in order to pass the classes,” said Pennypacker.

Sotomayor at PA Immigrant also strives to retain funding for ESL programs with the Fair Funding for Schools program. This ensures that schools can educate all children, regardless of language and financial situation within a school district.

The effects of children not attending schools or having appreciate resources in their schools is an issue because K-12 education success is essential for pursuing higher education.

Data collected by Texas Tech University shows that only around 15 percent of undocumented high school students continue their education, compared to 70 percent of their peers. This is also alarming because often, many undocumented students have high grades and are involved in extra circulars but will not pursue higher education due to their citizenship status.

“Undocumented students tend not to attain higher education mainly due to lack of undocumented students to obtain financial aid, due to citizenship status. This means the entire cost of college would be on their parents and their own shoulders,” said Dr. Jennifer Bulcock, Assistant Director of the Center on Immigration at Cabrini University.

Education is important to creating opportunities throughout life and gaining knowledge to use. Education of all people is also integral to building a healthy and efficient society.