Migration into the United States has become a very heated and political topic. The public’s opinions of the topic have been influenced by the media, the environment they grew up in, and their political stance.

Jennifer Bulcock, Ph.D., the Assistant Director of The Center on Immigration at Cabrini University, says that there are tropes and stereotypes that lead to the idea of the good immigrant and the bad immigrant. “This construct perspective in terms of what an immigrant individual is supposed to be or at least at what we expect them to be,” Bulcock said.

Fear mongering in the media can cause people to have negative knee-jerk reactions to immigrants. “By inserting this narrative into the public consciousness, people become dug-in in their perspective on immigrants and migrant populations. They then become unable to understand and have their mind changed by what is factually going on,” Bulcock said. 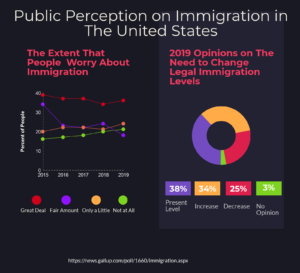 In the past few years, people’s political stance has driven their stance on immigration. According to Pewglobal.org, in the U.S., about 83 percent of people who are Left-leaning view immigrants more favorably while on 37 percent on the Right do. To add to these findings, more people on the Right support deportation of undocumented immigrants at 65 percent, while only 28 percent on the Left support it.

CNN took a collection of major points from one of President Donald Trump’s immigration speeches.  They reported Trump said, “Anyone who is in the United States illegally is subject to deportation.” And “It's our right as a sovereign nation to choose immigrants that we think are the likeliest to thrive and flourish and love us.” And "Anyone who tells you the core issue is the needs of those living here illegally has simply spent too much time in Washington."

He has backed up his views with actions throughout most of his term. A summary of his policy shifts on immigration was created by migrationpolicy.org. “Among its major actions on immigration during 2017, the administration:

Despite this, Americans have started to view immigration more positively. According to a recent study by Gallup published in the New York Times, “75 percent of Americans think immigration, in general, is good for the nation. When asked their thoughts about ‘legal immigration’ specifically, even more Americans, about 84 percent, said it was good for the country.”