Did you know that if a child is away from their parent for more than a couple hours that child may experience some sort of separation anxiety? You may have answered "yes" to this because you may know, or have, a child who does this.

Now, think about the 1,995 migrant children who have been forcibly separated from their families at the U.S.-Mexico border between mid-May through the end of June, 2018. The majority of these children were placed in detention centers along the border, traumatizing a large number of them and setting them up for detrimental physical and mental health impacts. 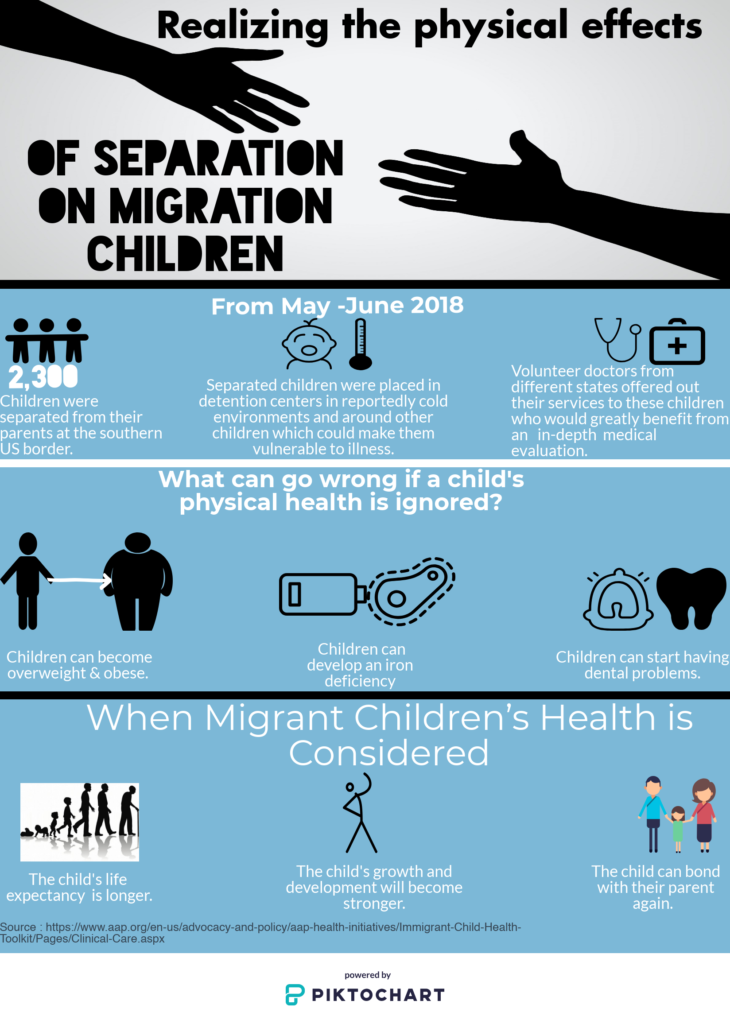 The American Psychological Association (APA) released a statement on June 20, 2018 stating that this separating families policy was inhumane and something that is very traumatizing to everyone, especially the kids. According to the Society for Research in Child Development, “The evidence that family separation is harmful dates back to studies on the effects of parent-child separations on children’s well-being during World War II. This research documented far reaching effects of these separations into adulthood, including increased risk for mental health problems, poor social functioning and many more issues” (SCRD 2018).

In a recent Vox article, Dylan Gee, an Assistant Professor of Psychology at Yale University, stated, “When a child is ripped away from a parent, their body goes into fight-or-flight mode. Stress hormones surge, and the body prepares for danger." There are many things that can wrong with a child’s health if not properly looked at or treated. Even after they are reconnected with their family, there may still be some long-term challenges. Gee contends that family separation could ruin children's brains forever.

There are many resources families and children can seek out in order to help them with trauma. There is a program at the Children's Hospital of Philadelphia (CHOP) called “The Refugee Health Program” where they provide services to help nurture children and families back to health and provide them with additional resources to get them through a traumatic event. In a phone interview with Meera Siddharth, MD, a pediatrician at CHOP's Karabots Pediatric Care Center in West Philadelphia, the doctor spoke about how just a simple trip to a physician's office could help the child out tremendously.

“Most times when parents are coming in or calling, it’s because their child is really ill or they have fever, but it’s important to read signs,” Dr. Siddharth said. She mentioned that children in detention centers do not often receive regular check-ups.

There are a few refugee health programs throughout the U.S., but this particular one at CHOP works to ensure that all refugee children have a healthy start to their lives in the U.S. A separate program at the Esperanza Health Center  helps children of Latino and under-served parents with their psychological and physical health as well.

According to American Progress, "As of today there has been more awareness around immigration-related health issues, and there are a large number of organizations willing to have health care providers on-board to provide much-needed care on the border.”