The Brain Science of Trauma

The Brain Science of Trauma

According to Allison Abrams, LCSW-R, “Children who experience trauma are at a much greater risk of developing mental health disorders such as depression, anxiety, addiction, ADHD, and PTSD.” One such trauma that thousands of children have been forced to endure was the separation from their families at the U.S. border through the Trump administration’s Zero Tolerance Policy in the Spring and Summer of 2018.

Wyn Brown is a licensed psychologist with knowledge of the brain science behind trauma. Trauma and family separation go hand in hand, said Dr. Brown, because the brain effects connect them both.

Counseling and therapy can support trauma victims. If people who are struggling don’t get the help they need, their mental state gets worse. According to Abrams, if people cannot get the help they need, “This can have devastating long term effects on the psyche which can lead to self-destructive behaviors as an adult.” Matthew Tull states that self-harm, alcohol abuse, attempted suicide etc., are the long-term effects of trauma.

Dr. Brown works to evaluate her clients, who come in for a diagnosis or prescriptions. She listens to their stories, asks open-ended questions and aims to put a plan in place to help eliminate triggers, cope with trauma and gain the support needed to heal. 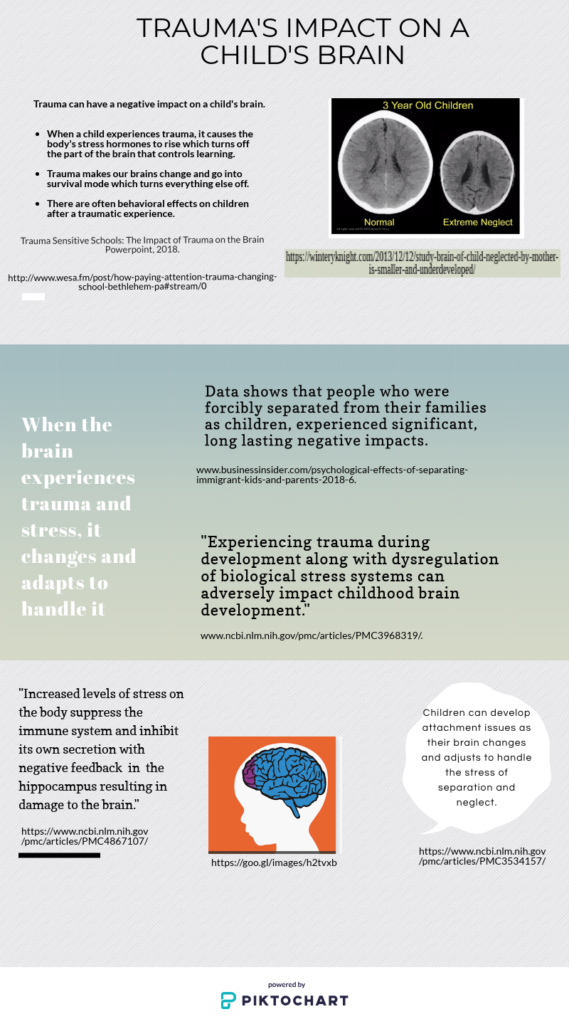 Medications can help patients deal with their trauma. For example, according to Lawrence Robinson, antidepressants prescribed by a psychologist can increase the levels of neurotransmitters in the brain that aids in the anxiety and agitation that can result from the trauma. Depression is caused by a chemical imbalance in your brain. PTSD and depression have a correlation because people with either one would be prescribed with the same medication. One way that people heal from their traumatic events is to do the EMDR. This is a cognitive behavioral therapy where you practice eye movements to “unfreeze” the memory of the trauma.

Fernando Moncado, an orphan living in Honduras, experienced a traumatic life event. He was separated from his family when he was very young because his family could not afford to raise him. The orphanage took care of Moncado his whole life, and he never saw his family.

“I missed my parents a lot and had to pretend that the orphanage was my family," Moncado said. "It was the only way to survive without being miserable everyday wishing I could be with them.”

As a result of the separation from his family, Moncado experienced anxiety, depression, and hopelessness. When a child is not taken care of by their family members, the brain survives in the state of fight or flight mode. This means that their brain is being damaged by chronic stress from the traumatic life event. When a child is separated from their family when they are young, they can experience terrible physiological illnesses that require a professional to guide them through the trauma.

According to J. Douglas Bremner, an expert in traumatic effects on the brain, trauma induces decreased function in the hippocampus, visual association cortex, parietal cortex, and inferior frontal gyrus. These decreases in brain function can have negative effects and could last a lifetime without cognitive behavior therapy. In order for someone struggling with trauma to progress, people need to face what causes them the stress and engage in therapy in order to heal.